The Net of God’s Love

This is the fifth in a series of nine photovotionals based on the photo prints
of mine which we have hanging on our walls in our home in Brandon, Florida. 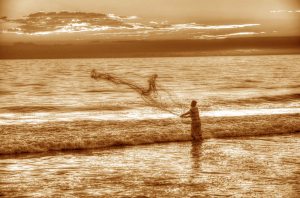 It was evening and time for the fisherman to fish. He walked along the seashore near Ixtapa, Mexico, waist deep in the waves, casting his net again and again. Capturing a scene that is there and then gone within less than a second is one of the gifts of a camera. Here my camera caught a moment in time when the net was at its artistic best, on its way to the task of capturing some fish.

The picture, edited to a sepia tone, hangs in our home as a reminder of Jesus’ rich imagery of how He called four professional fishermen to change vocation from fishing for fish to fishing for people. These fishermen didn’t use a line and hook but a net, much as the modern day Mexican fisherman in the picture.

We humans are not left to our own efforts when it comes to finding God. We simply have to let ourselves be found! Once we’re in the net of His love we’re called to offer a captivating witness by our character, our deeds, and our words to those within casting distance of our influence.

People often come up with their own form of reality, of the way they think life really is, or at least hope that it is. The reality, the real reality, is that God wants to capture us in the net of His love!