Actual tadpoles & caterpillar photographed on the table in our screened patio.

We’ve had both tadpoles and caterpillars living in our screened-in patio. No more. Now there are frogs in my small decorative pond by our patio and butterflies in the sky above our house. What an amazing transformation for us and our grandchildren to have watched, the process called metamorphosis, tadpoles turning into frogs and caterpillars into butterflies!

Imagine if you could find a person who was city born and raised, had never had a science class, and was clueless about anything in nature. Imagine showing them a tadpole and explaining how it turns into a frog or showing them a caterpillar and explaining how it turns into a butterfly. They’d look at you incredulously, say you were crazy, that you were making things up, that what you described was pure science fiction.

Of course we all know this is how frogs and butterflies come into the world, through the amazing process of metamorphosis, from tadpoles and caterpillars. We’re still amazed, but we know this is what happens.

A clear message from God that’s peppered throughout the New Testament of the Bible is that a similar process, though far more amazing, is the eternal life-cycle God has planned for His people. Physical death is clearly described as not the intended end of human life. The life-cycle God has designed for people is to eventually have a new body, in His heaven, forever, a body that’s not susceptible to pain, illness, or death.

Hard to understand, grasp, and believe? Yes, but the nearly unbelievable metamorphosis process of the lowly tadpole and caterpillar should bolster our belief that for God’s most cherished creatures He’s ever created, people, He has something in store that takes metamorphosis to a whole new level!

The one clear differentiation between the transformation process for tadpoles, caterpillars, and us is that tadpoles and caterpillars don’t have any say in the matter; metamorphosis is just what happens to them. We people, on the other hand, are in a different category altogether. We’ve been given a choice as to whether we want this transformation that will make us suitable for life with God in His heaven. This is because He wants it to be a love relationship, and love has to be a choice, not compelled. It’s our choice, while we’re in the tadpole/caterpillar stage of our lives.

I, for one, have decided to give myself over to Him, asking Him to help the metamorphosis begin to happen in the here and now on earth. It gives me great hope that when my time on earth is done He’ll complete the metamorphosis then and there in Heaven!

“But our citizenship is in heaven. And we eagerly await a Savior from there, the Lord Jesus Christ, who, by the power that enables him to bring everything under his control, will transform our lowly bodies so that they will be like his glorious body.” Philippians 3:20-21 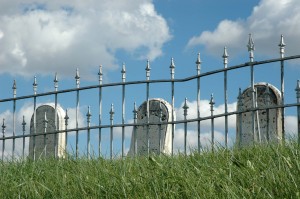 Visit the old section of a cemetery and you’ll see very few flowers. No one remembers a person buried in a very old grave. Anyone who remembered that person is also long dead, and even the person that remembered that person. All of the sacrifices made for others, all of the work and toil — what was it for? Some people would say that we in some small way help humanity for generations to come. However, the reality is — from a humanist point of view — that someday humanity will be extinct. It may happen by an asteroid’s wiping out the earth, by a nuclear holocaust, or by the sun’s eventually becoming a giant red star and burning out life on Earth. Even fleeing to another planet is only a temporary solution until some other cosmic disaster happens or the universe grows cold and dark.

If there’s no life beyond this one, life is truly hopeless. Anything we do is only momentary. But Jesus said, “Because I live, you also will live.” (John 14:19) We have the opportunity to be loved by God, love God back, love others, and do His kingdom work forever! But, according to Holy Scripture, eternity is being built on what we do here and now. It’s all important, and it has eternal ramifications! If we don’t want anything to do with God in this lifetime, God lets us have our way for all of eternity. This hellish existence away from God is called exactly that in the Bible: hell. On the other hand, if we decide to center this life around God and His Son Jesus, we get to enjoy the ramifications of that for all of eternity — and that’s a heavenly experience: what the Bible calls heaven. These few years set the course for all of eternity.

Someone wrote, “Only one life, ’twill soon be past, only what’s done for Christ will last.” Who we seek to be for Jesus and what we seek to do for Him will have eternal results! His resurrection gives us that hope!

The Alphabet of Faith — “Q” is for QUESTION 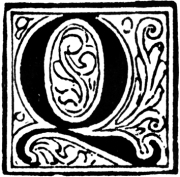 We continue our  series on the Alphabet of Faith with “Q” as our letter of the week. And, yes, there’s not that much from which to choose. My choice among the meager options?

Non-believers in God have few questions because they have no supreme authority to ask, there are no answers; things are the way things are. It’s we people with faith in God who have the questions.

We can ask good questions and the wrong kind of questions. Questions can communicate an accusation, a demand for an explanation. “Son, why did you get in so late last night?” a parent might ask. There’s a lot more going on here than an expression of curiosity! We can do the same with God. “Lord, what are you doing?” can mean we’re calling God on the carpet, that we’re demanding an explanation. This is not a good idea! It’s interesting that in the great book of suffering, the book of Job, it is God who asks the big questions! God says to Job, “Brace yourself like a man; I will question you, and you shall answer me.” (Job 38:3)

As a pastor I’ve often heard it said, “When I get to heaven I have a lot of questions for God.” I’m thinking that won’t be the case. When we see God face to face, experience His infinite love and wisdom, we won’t even care about our questions. If He were to say to us upon our entering heaven, “So, I understand you have some questions?” I think we’re going to reply, “Never mind.” More completely understanding God will be answer enough!

There are, however, good questions to ask God, each and every day, right now, for that matter. “Lord, what do you want to teach me?” “Oh God, what would you have me say and do in this situation?” “Holy God, what am I blind to in myself that you want me to see?” Even a sanctified curiosity in a difficult set of circumstances can prompt an appropriately posed question of, “Lord, what in the world are you up to in this situation?” and then be open to His sharing a glimpse of His mysterious ways, if He so chooses to answer.

This has been but a brief reflection on the role of questions in the life of the person of God. Did it help? 🙂

The Best Part of Heaven 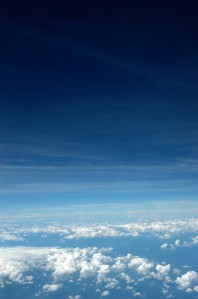 I’ve officiated at over 400 funerals during my ministry, so I’ve heard many a conversation about the deceased. I’ve often been amazed at what excites people about heaven. They’ll say about their deceased loved one, “Now Harry’s up there playing golf with his ol’ buddy Bill,” or “I bet Aunt Henrietta is having a blast playing cards with Aunt Gertrude.” As I stand there, looking very pastoral, and listening to such conversation, I’m thinking, You’ve got to be kidding! Is that the best heaven has to offer: a golf game or card game?

I’ll admit that being with God isn’t always the first thing I think about when I think of being in heaven, so I shouldn’t be too judgmental of those who dream of golf and card games in heaven. I’m determined, though, to aim at having my deepest satisfaction be in God and in God alone. After all, it’s God in heaven that makes heaven so heavenly. God’s the best part of heaven!